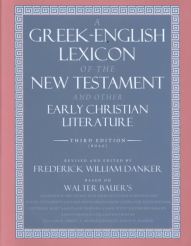 I find languages endlessly fascinating. Today my moment of fascination came as I was working with my students on the Greek text of Galatians 2:15-21. The whole passage is extraordinary, full of rich theological language and linguistic conundrums that have stimulated hundreds of scholars to write thousands of pages of discussion. What caught my attention in passing today, however, was not simply the theological profundity of the passage (though reflecting on that was wonderful!), but one simple word: Ἰουδαῖοι (Ioudaioi). It was the composition of this word (which means ‘Jews’) that struck me, as one of my students battled to pronounce it. It is a word of 8 letters, 7 of which (87.5%!) are vowels.

Of course, there are a number of short words in Greek that are composed entirely of vowels. Thus, the word εἰ (ei, meaning ‘if’) is 100% vowels! But I cannot think of another word of similar length to Ἰουδαῖοι that contains such a high proportion of vowels. If anyone can think of one, I will be interested to know.

Noting little details such as this is part of what makes learning Greek (or any other language), for me at least, such a delightful experience!